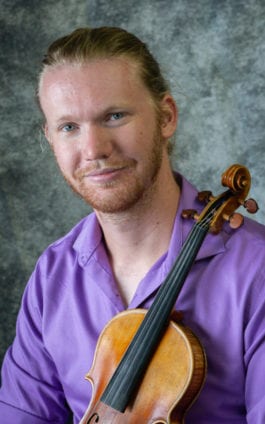 Dennon joined the Stillwater teaching staff in the summer of 2017, and received his B.A. in Music Education from Fort Lewis College. Before moving to Durango for college, his extensive experience working in leadership and outdoor programs in his hometown of Nederland, CO made him well-equipped to work with kids of all ages.

Since 2015, he has been a class and private instructor at the Be FRANK Foundation. He specializes in several styles on both viola and violin, including classical, Celtic, bluegrass, and pop. Dennon is an active professional musician, playing in the Durango Bluegrass Meltdown and Durango Celtic Festival. He performed in the cast of “The Legend of Danny Boy” at the Henry Strater Theatre in 2017. Dennon had the opportunity to study Scottish fiddle with Iain Frasier at the Merlin Academy of Traditional Music in Scotland in 2017. Dennon is currently the orchestra director at Escalante Middle School.